PANTELIS MELISSINOS: “The Greek Lord of the Sandals”

His grandfather, George Melissinos, was one of the most famous shoemakers in Athens. He even made hiking shoes for members of the royal family. His father, Stavros Melissinos, made the ancient Greek sandals fashionable, catching the eye of international celebrities, such as the Beatles and Sophia Loren. At the same time, he wrote poems and thus he got known as the “Sandal-Making Poet”.

“The business started with my grandfather in 1920, when he set up shop on Pandrossou Street, in Monastiraki. A man of the world and always well dressed, he knew how to make shoes, but he was more of a businessman” says Pantelis Melissinos to ‘Espresso’ and continues: “At that time, all health conscious Athenians used to mountain hike and they needed hiking shoes . . . These were the sport shoes of the time. So, my grandfather made them and among his clients were Queen Fredericka of Greece and other members of the royal family.

Unfortunately, his grandfather, Georgios Melissinos passed away, from a stroke, just at the age of 55 and his father Stavros had to put aside his film studies and take over the family business.

“The times were bad for post-war Greece -we are talking about 1955. So, my father had the brilliant idea to make for daily life ​​the ancient Greek sandals that my grandfather made for the National Theater of Greece. He was after all an artistic person and a self-published poet – hence he became known as “the sandal-making poet”. Of course, he took a risk back then with the sandals, but it worked out well for him. An English choreographer, who saw them in his display window ordered some for her group. My father took it as a sign from God and put some more sandals in the window and sold them almost immediately to American tourists. In one day, he made as much money as he would make in a month! ” says Pantelis Melissinos.

This is how the new golden era for the sandal workshop began.

“Men and women started buying our sandals -ordinary people and celebrities as well. Jackie Onassis, Sophia Loren -who was shooting the movie ‘Boy on a Dolphin’ in our country- Agatha Christie, Gary Cooper… countless celebrities have walked through the doors of our workshop… Of course, the Beatles were the ones, who made us a household name, in the late 60’s. They were brought to our store by Alexis Mardas, also known as ‘Magic Alex’, who was their associate and friend. My brother, who was a big Beatles fan, was thrilled to see them enter our store. John Lennon came back alone, for more pairs. However, as soon as the news spread that the Beatles visited Melissinos the Poet and sandal maker, people started flocking to our shop… and of course, other businessmen entered the competition with their own sandals”, he states.

Pantelis Melissinos remembers seeing -when he was a child- famous people visiting his father’s shop. “At that time, well-known Greek artists, like Tsarouchis, Argyrakis, Katsaros, were our regular visitors. In my mind, they belonged to mythical worlds. Especially Tsarouchis with his white beard and hair looked like Homer or Plato,” he comments.

Every day, as soon as he finished school, he ran to the sandal workshop to learn the secrets of the trade.

“I started making sandals, while I was still a child, I really loved it. At the same time, I started to write, to paint, to play the piano and create music. At first, I wanted to study at the School of Fine Arts, in Athens but eventually I found myself in America. I studied illustration at the prestigious Parsons School of Designs in New York City, where I also got my Master’s in Painting. As soon as I graduated, I became Artistic Director at the Greek Cultural Center of New York City. “I lived in Manhattan throughout the 80s,” he says.

His decision to return to Greece was linked to a robbery against him. He was attacked by four thugs in New York who broke his finger in an attempt to take a ring he was wearing.

“I left by ship. After that incident I could not even get on a plane I had become claustrophobic. I took a Polish cargo ship back home. It carried mainly goods, but also took a limited number of travelers. After eight days we arrived in France. I had my artworks with me, but for some reason the customs officers believed that my paintings were not made by a student, but by an important artist!

Luckily, a policewoman, at the customs, recognized his last name -Melissinos- and asked him if the Poet Sandal Maker of Athens was his father,

“Every year I go there and buy sandals from his shop” she replied.

“I took over the sandal business in 2004. Until then, I would help my father but, he would not let me take initiatives, with regard to new designs etc. In 2004 he was evicted from Pandrossou St., where the store had been for more than 80 years, and was forced to retire. So, I moved the store to the Psirri area, on Agias Theklas Street, where all our old customers started coming”.

It was the year of the Olympic Games, so it all worked out very well for Pantelis Melissinos.

“I also started to become internationally known as the ‘Poet Sandal Maker to The Stars’ and got involved in the process of experimenting with hand painted sandals and other unique designs. I enjoyed this a lot and of course, I worked very hard, for the name I started making for myself ” he points out.

As for his own customer list of celebrities? It is very large and includes kings, politicians and Hollywood stars.

“In 2004, I was visited by Queen Sophia of Spain, who knew my father. “I made sandals for her son, Felipe,” Pantelis says and continues: “Jill Biden, the wife of the current President of the United States, who was Vice President back then, visited me in 2011. It was an intense day. The police had closed off Ermou St., while some guys with sunglasses glasses were all around the store, like the FBI agents we see in movies “, he states.

Shipping heiress Eugenia Niarchos is also one of his fans.

“Sarah Jessica Parker found out about my sandals through a friend, who got her my sandals and she replied with an autographed photo of hers and a thank you note”.

“This year I learned that Eugenia Niarchos also likes them. A friend of hers came to get sandals and told me that she had sent him to me. A rather meticulous customer was film director Brian de Palma, who was a real hair-splitter. With Lily Tomlin we became instantly friends and we even went to a patisserie together to eat Greek desserts”.

Bob Saget –who died relatively recently- came to the store and I mistook him for a doctor. I asked him: ‘Are you a doctor?’ and he replied ‘Yes, I do surgeries’. “At some point someone came over and recognized him and then, I remembered that he was presenting the show with the funniest videos in America.”

In 2019, Pantelis Melissinos moved his store to the Acropolis neighborhood, at 16 Tziraion Street. Then, Covid arrived as well and the lockdowns. Of course, now people are starting to find his new place.

“Some people are still looking for me in Psirri, but now with the internet things are easier,” he says.

The recent explosion on Synrou Ave was shocking for him.

“It happened nearby and all the display windows of my store were broken. They called me and said “come here, there was a bomb explosion”. I went crazy! “Then we heard that it was a gas leak, but nothing has been officially confirmed yet,” he comments.

As for the dream of his life, the “Poet Sandal Maker to the Stars” emphasizes, he wants to finish the way he started, that is with art!

“I want to work more with my painting, poetry and theater projects and make my sandals even more artistic, a true work of art…” he concludes. 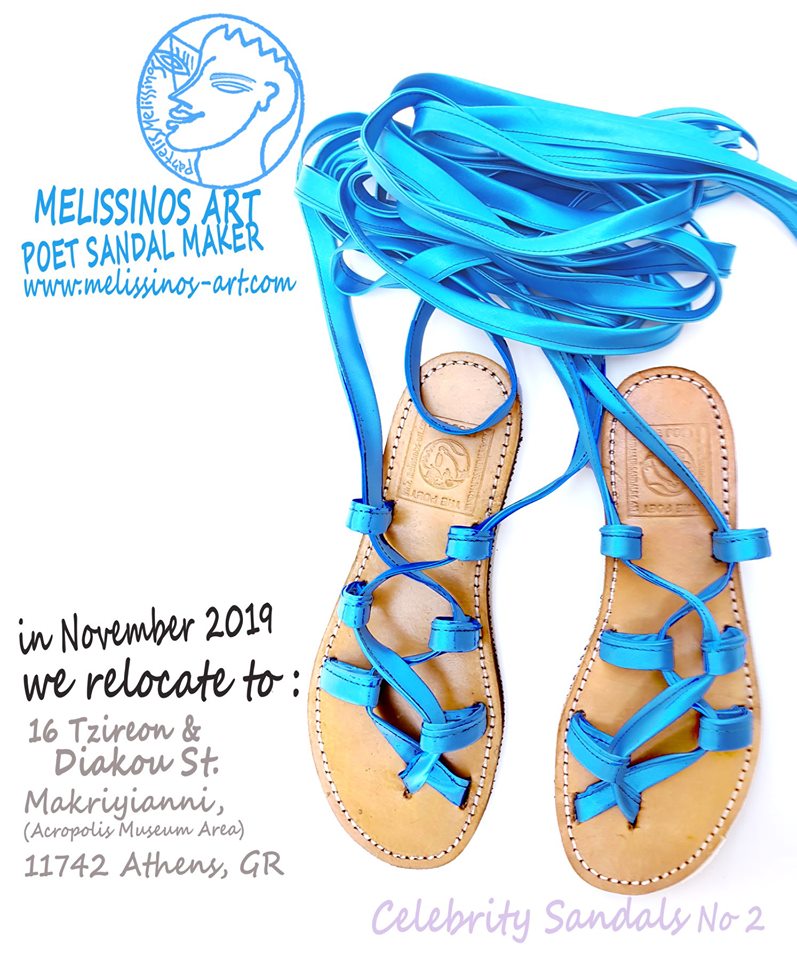